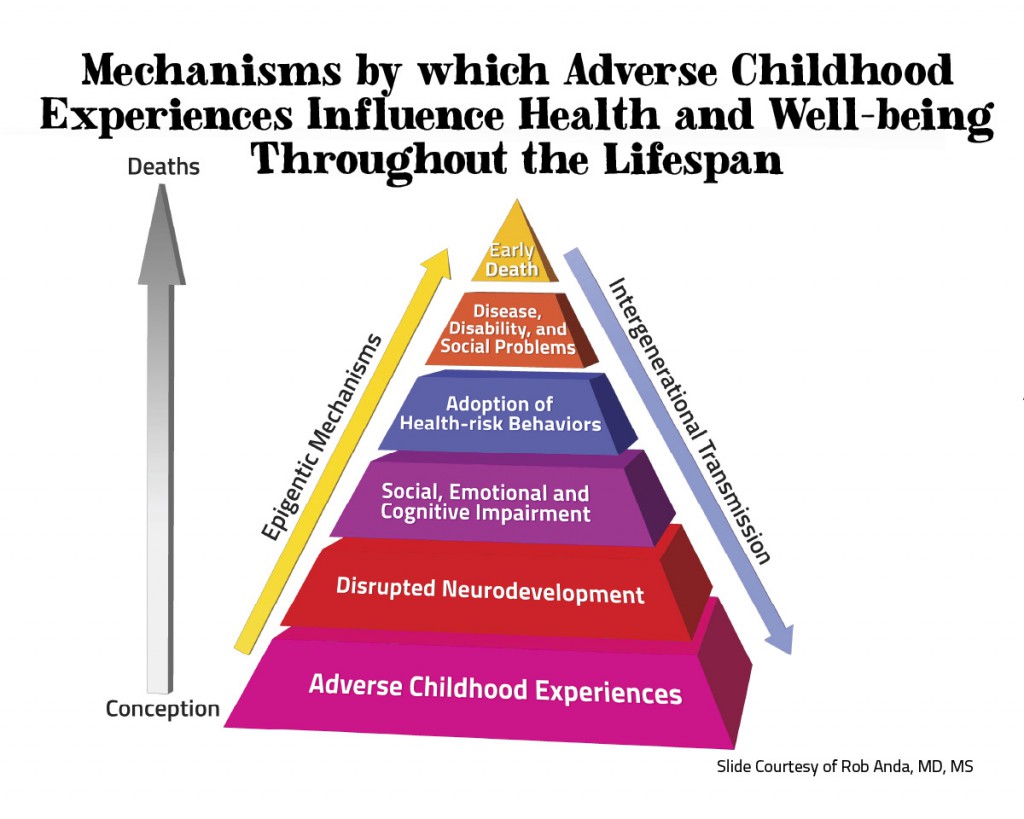 The Centers for Disease Control and Prevention’s (CDC) Adverse Childhood Experiences Study, first published in 1998, measured 10 types of childhood trauma. Five types were the usual suspects: physical, sexual and verbal abuse and physical and emotional neglect. Five were family dysfunction: a member of the household who is addicted to alcohol or other drugs; a household member who is in prison; a household member with a mental illness; a mother who is a victim of domestic abuse; and loss of a parent due to separation or divorce. There are, of course, other types of adversity—for instance, witnessing a sibling being abused, being bullied at school, witnessing neighborhood violence, experiencing a natural disaster—but those were not measured. Some subsequent surveys have included other types of trauma.

Of the more than 17,000 middle-class, college-educated, majority-white, employed people with health insurance who participated in the CDC’s study, 66% had experienced at least one of those 10 types of childhood adversity.

Since 2008, 22 states have done ACE surveys representing the general population; they have found results similar to those found in the CDC’s ACE Study. Social service agencies, pediatricians, the city of Philadelphia and the World Health Organization have also conducted ACE surveys. In specific groups—teens who receive services for troubled youth, for instance, or students who attend an alternative high school—the incidence of child adversity is even higher.

The findings from these studies show:

How Adversity Affects the Developing Brain

Brain science shows that, in the absence of protective factors, toxic stress damages children’s developing brains. Stress alters developing brains, and whether the changes are adaptive or maladaptive for the person depends on the context. Toxic stress is the body’s physiological response to events or environment, wherein the stress response is sufficient to cause maladaptive changes. This is the kind of stress that can come in response to living for months or years with a screaming alcoholic father, a severely depressed and neglectful mother or a parent who takes out life’s frustrations by whipping a belt across a child’s body.

In these severe circumstances, kids need stress hormones—a normal survival response—to remain hyper-vigilant in their terrifying and unpredictable circumstances. Their world is one of constant danger. When they’re triggered, their “survival brain” takes over and literally shuts down their ability to learn, think rationally and make decisions. The slightest provocation—a teacher’s raised voice or an accidental bump from another child—may trigger them into “fight, flight or freeze” mode. They may lash out with a punch, bite, throw chairs, run away or withdraw into themselves from the outside world.

How does this happen, exactly? When you hear or see a threat, such as a vicious barking dog racing towards you, that information goes immediately from your eyes and ears to your brainstem –to the locus coeruleus–which alerts your limbic brain. That limbic brain—sometimes called “survival brain” because it’s something we have in common with all animals—has kept humans alive for millions of years. That’s because when there’s danger the limbic brain—specifically, the amygdala—sends out a “red alert” signal faster than your thinking brain can comprehend.

That red alert knocks your thinking brain (prefrontal cortex) off-line, so that your body can automatically do all the things it needs to save your life. It also kicks the brain’s hypothalamus into gear. The hypothalamus flashes two chemical messages. One tells the adrenal glands, perched on top of your kidneys, to instantly gush adrenaline to the heart, lungs and large muscles in the arms and legs to get you moving fast! The second message tells the pituitary gland to direct the outside layer of the adrenal glands to produce cortisol.

Cortisol is the main stress hormone. It’s longer-lasting than adrenaline and sustains the effort required after the initial fight or flight by keeping blood pressure high and releasing glucose to power the muscles and brain to remain hyper-vigilant. Maybe you climbed over a fence to get away from the dog, but now you have to run to your car because the dog is digging a hole under the fence to reach you. Meanwhile, as cortisol builds up, it eventually alerts the hypothalamus that the immediate danger has passed, and to stop sending alarm signals. If there are no further red-alert messages from the amygdala, the increasing cortisol also signals the part of the nervous system that calms the body.

Trauma—such as being attacked by the dog, being beaten by a parent or enduring overwhelming verbal abuse as a child—takes this red alert response to an extreme. That’s when the helpless “freeze” response can kick in. Both systems—the actions ordered by the red alert and the part of the nervous system that gives the all-clear calming effect—work at the same time. At that point, the body has two choices: remain on super-high alert or tune out to what’s happening, also called dissociating. Post-traumatic stress describes the after-effects of having all systems flooded to the point of overload: a person may roll between staring blankly into space and over-reacting to sounds or events.

There are two other important aspects of this process. First, the amygdala sends a message to the hippocampus to record this terrifying event, branding it into the brain’s deepest memory. Any similar event can trigger this memory, which will in turn set off a new red alert. And second, living in a continual state of red alert resets a person’s fear response at a higher level than normal, so that even a teacher raising her voice to be heard might trigger a full blown fight, flight or freeze response from a child who unconsciously associates it with a brutal and enraged parent.

If a child lives in a continual state of red alert, she or he is physiologically unable to learn, because the part of the brain that learns—the prefrontal cortex—is “off-line”. Until the child has recovered, which may take anywhere from minutes to days, no amount of punishment or admonishments to work harder will change the situation. The child’s behavior is a normal, adaptive response to toxic stress; it is not “willful” or intentionally directed against a teacher or parent.

The good news is that the brain is plastic, and continually changes its wiring in response to the environment. If the toxic stress stops and is replaced by practices that build resilience, the brain can slowly undo many of the stress induced changes and return to baseline. This active process of trying to return to baseline is called allostasis.

But if there is no intervention, kids can fall behind in school, fail to develop healthy relationships with peers or create problems with teachers and principals because they are unable to trust adults. Some kids do all three. With despair, guilt and frustration pecking away at their psyches, they often find solace in food, alcohol, tobacco, methamphetamines or other drugs, inappropriate sex, high-risk sports, and/or work and over-achievement. These are examples of behavioral allostasis – behaviors that transiently turn off stress, but ultimately cause more distress in the long run. Children don’t regard these coping methods as problems. Consciously or unconsciously, they use them as solutions to escape from depression, anxiety, anger, fear and shame.

These coping mechanisms can cause health problems; smoking, obviously, can lead to lung cancer. But chronic toxic stress—living in this red alert mode for months or years—can also damage our bodies.

The toxic stress of childhood adversity also affects our bodies, which results in long-term health consequences.

The system that controls our stress and trauma responses is called the HPA system, for hypothalamus-pituitary-adrenal, and it normally works as efficiently as air traffic control at a busy airport.

Too much cortisol can lead to osteoporosis, arthritis, gastrointestinal disease, depression, anorexia nervosa, Cushing’s syndrome, hyperthyroidism and the shrinkage of lymph nodes, leading to the inability to ward off infections.

If the red alert system is always on, eventually the adrenal glands give out, and the body can’t produce enough cortisol to keep up with the demand. This may cause the immune system to attack parts of the body, which can lead to lupus, multiple sclerosis, rheumatoid arthritis, and fibromyalgia.

Cortisol is also extremely important in maintaining the body’s appropriate inflammation response. In a normal response to a bee sting or infection, the body rushes antibodies, white blood cells and other cell fighters to the site and the tissues swell while the battle rages. But too much swelling damages tissue. Cortisol controls this fine balance. So without the mediating effects of cortisol, the inflammatory response runs amok and can cause a host of diseases.

If you’re chronically stressed and then experience an additional traumatic event, your body will have trouble returning to a normal state. Over time, you will become more sensitive to trauma or stress, developing a hair-trigger response to events that other people shrug off.

Biomedical researchers say that childhood trauma is biologically embedded in our bodies: children with adverse childhood experiences and adults who have experienced childhood trauma may have a smaller prefrontal cortex (the thinking part of the brain), a more active HPA system and higher levels of indicators for inflammation than those who have not suffered childhood trauma. This is the main reason why the lifespan of people with an ACE score of six or higher is likely to be shortened by 20 years.

Epigenetics – We are our epigenome, not our genome.

Most people believe that the DNA we’re born with does not change and that it determines all that we are during our lifetime. But the research from epigenetics—the study of how social and other environments turn our genes on and off—shows that toxic stress can actually alter our genes and cause long-term changes in all parts of our bodies and brains. What’s more, these changes can be transferred from generation to generation.

Epigentics means “above the genome” and refers to changes in gene expression that are not the result of changes in the DNA sequence (or mutations).  As an example, a process called methylation—the addition and subtraction of tiny groups of chemicals—can turn genes on and off. There are many types of epigenetic mechanisms, including environmental chemicals, drugs/pharmaceuticals aging and as we know now – stress. Epigenetic research into how childhood adversity changes genes is still in its early stages. However, one study of adults who had committed suicide pointed to a possible mechanism. Researchers compared the brains of adults with childhood trauma who had committed suicide with the brains of adults without childhood trauma who had committed suicide. In the brains of those who had experienced childhood trauma, the genes that regulated removing cortisol were 40 percent less functional—meaning that those individuals were less able to regulate stress. Another example has been documented wherein infants who were exposed to prenatal maternal depressions, have changes in the methylation of the glucocorticoid recepter genes. [Oberlander, et al, 2008. Epigenetics 3-97-106]

This body of research—the epidemiology of ACEs, the effects of toxic stress on children’s brains, the biomedical impact of toxic stress, and the epigenetics of toxic stress—marks a pivotal point in our understanding of human development. Researchers are identifying knowledge gaps—focusing especially on what can prevent and even reverse the damage of childhood adversity—so they can lay the scientific foundation for a culture of health.

(For a more detailed explanation of the epidemiological, neurobiological, biological and epigenetic effects of adverse childhood experiences, read Scared Sick: The Role of Childhood Trauma in Adult Disease, by Robin Karr-Morse and Meredith S. Wiley.)

This site uses Akismet to reduce spam. Learn how your comment data is processed.